The Peace Bell Scholarship was started in 2008 through alumni gifts. As of Septmber 2018, more than130 students were granted the scholarship. In total, ICU has received pledges for approximately ¥550 million from over 1,300 donors. Even as the scholarship becomes stronger, the majority of gifts have come primarily from ICU's earliest alumni, those from the classes of 1957 to 1966. ICU hopes younger generations will follow this new tradition in serving to "pass the torch" of the program.

ICU has offered exemptions for tuition and various fees for students affected by the Tohoku earthquake and tsunami on 11 March 2011. Although recovery for the area has been proceeding gradually, various difficulties linger. In light of this, ICU continues to offer exemptions for these students in this academic year. Also, ICU has been taking multiple measures to offer the financial aids to students affected by other natural disasters such as Kumamoto Earthquake. Donations for Students Affected by Natural Disasters

Each year ICU confers a "Friends of ICU Award" on a student, staff or faculty member, or member of the ICU community who has performed the year's most outstanding meritorious activities. Previous Laureates of Friends of ICU Awards

This award is given to a student or group of students of the ICU High School who perform remarkable community or international service outside their academic pursuits. Previous Laureates of Friends of ICU HS Award

Donations Being Utilized after End of Donation

Installation of artificial turf on ICU's athletic field was completed in April 2013. The university, alumni and those who empathized with the cause worked together to plan and realize funding for the project, which ended in November 2016 with 856 donations, a total of JPY 37,195,791. Students are less likely to be injured and become soiled on an artificial turf when they fall compared to playing on a dirt field. So they can concentrate more on the physical exercise itself. We look forward to further contributions to upkeep the turf. 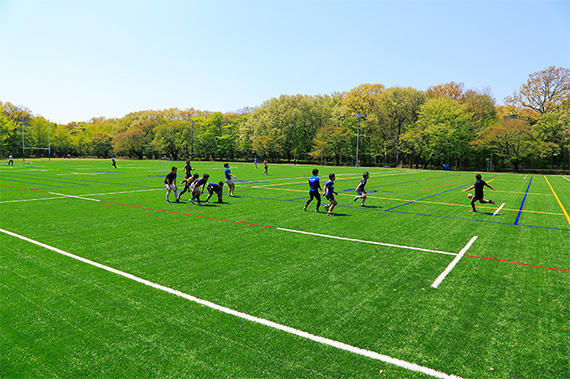 The road fondly known to the ICU community as Kassoro (runway) that runs from the front gate to the University Chapel is called MacLean Avenue in memory of Reverend John Allan MacLean who contributed to the founding of ICU. The first class planted seedlings that have grown into majestic trees that form a magnificent cherry blossom tunnel along the avenue in the spring. But after 60 years, these trees have aged, losing their vigor. The lifespan of the Somei Yoshino variety is known to be 100 years at most. In 2013 we had to cut down five cherry trees for safety reasons, as their branches fell off and the trees were in danger of falling over. Since the trees are continuing to wear out, we have established the Sakura Replanting Project and the Sakura Fund for donations to this Project. Sakura Replanting Project Report